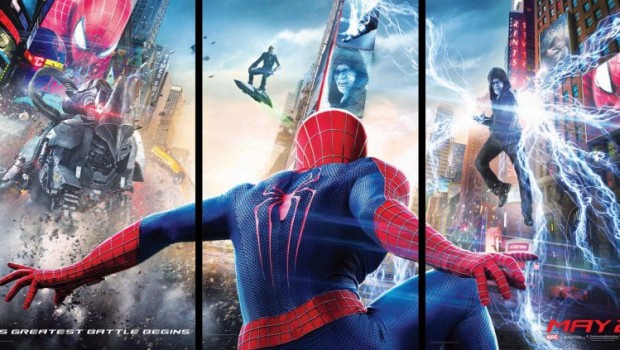 Last night I was lucky enough to go see a red carpet screening of the new Spider-man film, “The Amazing Spider-man 2: Rise of Electro”. I went in with fairly low expectations, Spidey has always been a bit of fun for me when it comes to movies, they’re never brilliant, but entertaining none the less, and I do love watching the webslinger’s brand of martial aerobatics. I guess you could say that until the rights go back to Marvel Spider-man movies and I have an understanding, they’ll let me enjoy them if I’ll remember not to think too much.

There’s really not much to the plot and it dances between the difficulties in Peter Parker’s love life back to the troubles of rising super villains. The whole thing is balanced on cliches, and while that really could have suited a spiderman movie, their attempt to make the atmosphere gritty meant that the emotional outbursts and nonsensical exaggerations felt jarring rather than reinforcing of a theme. Even the title ‘Rise of Electro’ feels falsified when he was hardly the main boss in this villain sardine can of a movie. What you can get from the plot though is that treating people badly might make them super-villains, especially if they’re psychotic to begin with. Also something about living life to the full, and that Spider-man is apparently made of rubber.

Where the Amazing Spider-man does feel good though is in the action. Spidey’s webslinging through the city is truly beautiful, and something it feels like they’ve finally perfected over the course of the movies. Battles feel real and hard hitting, as well as aesthetically pleasing, and as long as your mind can shut off about the little issues in the film these scenes are truly enjoyable. The premiere was in 3D and there was never anything too gimmicky and in your face, but it instead felt as though it gave the movie more depth, and enhanced the action scenes in an atmospheric sense. As a glasses wearer, I’m usually somewhat against seeing 3D films as the whole, double glasses thing isn’t exactly the most comfortable, however, I can say I’d really recommend it if you’re planning on paying to see Spider-man in the cinema.

This is what the movie is good for

I’m aware that after the first Amazing Spider-man film a lot of fans have thrown caution to the wind with their expectations and were all aboard the hype train for a thought provoking and exciting installment to the series, and I’m pretty sure they’d be disappointed. It’s not as though the sequel is a bad movie, it’s just not something deserving of too much mental energy. If you go in with your expectations lowered, and the willingness to just enjoy some kick ass spidey action, you’ll come out reasonably pleased.

This article was originally posted here