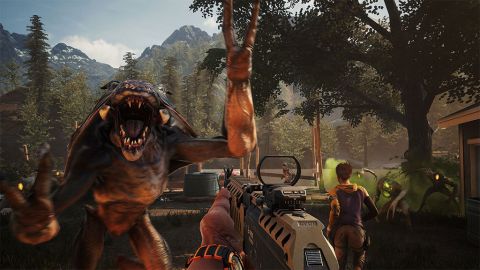 I was commissioned to write a several video scripts on talking points about EarthFall. I also played the game and collected the in-game footage to use in these videos.

I didn’t edit or appear in these videos.

Every day we hear about a new competitive shooter hitting the market but if you’ve been looking for something with a bit more camaraderie AND aliens, then you may want to take a look at Earthfall.

Earthfall, a new co-op survival shooter out now on Steam, PlayStation 4, and Xbox One, lets you take down hordes of ruthless alien drones with up to 3 of your friends.

You and your gang of friends or AI teammates will make your way through the ravaged and depopulated Pacific Northwest in an effort to survive the onslaught from the ever-changing horde of alien invaders. Work together to save not only save yourselves, but also maybe even what’s left of humanity.

There are a ton of weapons at your disposal to help make your stand, including your standard arsenal as well as some seriously crazy futuristic weaponry.

Fortify your defenses with barricades weaponized with fire or electricity to chargrill some aliens and keep your friends safe.

Or if you prefer a more direct approach, jump on a mounted turret and deploy sentries to help take down the never ending horde.

How you take on the extraterrestrial threat is up to you with 10 levels of story-driven cooperative play each with different tasks and missions to complete.

That’s just a quick overview of Earthfall and you and your friends can get in on the action today by picking it up on PS4, Xbox One, and Steam now. For more on Earthfall, set your sights here on IGN.

The Alien Enemies of Earthfall

Earthfall is a new co-op survival first person shooter where you and up to 3 of your friends work together to take down relentless hordes of invading alien drones.

Different enemy types present new challenges for you and your team to overcome and you’ll all need to work together online with different weapons and strategies to survive the neverending onslaught of enemies.

The Sapper is a large, slower-moving enemy filled with poisonous gas. You’ll want to take these out from a distance so you’re not caught in the resulting noxious explosion.

Blackouts challenge players with their ability to teleport and shoot out damaging bolts of energy. You and your team will need to keep your heads on a swivel to focus it down before it makes its next jump.

If your screen starts pulsing with an eerie sound, you’ve got an Enrager on your hands and this floating meat-blob needs to become your priority target asap. Hunt it down and destroy it before it alerts the other aliens to your position and completely overwhelms your team.

When a Whiplash joins the battle, keep an eye on all your teammates. These gangly aliens will try to abduct you — quite literally. Kill it to set your friends free from its clutches and bring them back into the action.

And lastly, one of the biggest alien threats is definitely the Beast. You’ll want to keep your distance from this monstrosity as it likes to charge at its victims, but be careful, as it can also vomit plasma at your team from afar. Everyone will need to focus all the fire power they can to help take this juggernaut down.

This outlines some of the unique enemy types you and your friends can take on in Earthfall today by picking it up on PS4, Xbox One, and Steam now. For more on Earthfall, set your sights here on IGN.

In Earthfall, you take on onslaughts of enemy alien hordes with up to 3 of your friends. There are tons of different weapons you can use to do this and you’ll need to find out which ones best suit your playstyle and strategies to survive.

For taking down the horde while maintaining some distance, assault rifles like the AK-67 and MP5X SMG pack enough firepower to keep you moving.

If you like to be more in the thick of things, then the Berg 950 Shotgun and EF Auto Shotgun are great for destroying waves of enemies at close to medium range. You can 3D print these and other weapons as you need them.

Or for that up close and personal satisfaction use a melee weapon like the Machete to devastate hostile aliens at point-blank. Better yet, you don’t even need ammo and if you’re feeling a bit overwhelmed, just hit your melee button (on PC that’s the Q key), to push back the enemies and give yourself a little breathing space.

And for a lot of breathing space, the Glintec Sniper Rifle gives ranged players the advantage with long distance scope. Get yourself a good vantage point, deploy turrets and barricades at your flank, and protect your friends from a safe distance.

Or hey, just blow things up! Earthfall offers a variety of grenades and landmines so you can zap, melt, bait & explode the alien scourge.

Lucky players will also get their hands on special weapons like the Reaper, Harbinger, and Valkyrie, which can be used to dominate enemies by burning, tearing apart, or even vaporizing them.

Ultimately it’s up to you and your friends to use whatever you can find to make those aliens wish they never invaded earth.

To get hands on with these weapons and more you can pick up Earthfall today on PS4, Xbox One, and Steam now. For more on Earthfall, set your sights here on IGN.